In early 2017 I boarded the YWAM PNG for the first time. It was beyond short notice, a memo was sent out speaking of the need for photographers and within 2 weeks I had arranged to come aboard, gotten my visa, booked flights and crammed as much work in beforehand to allow me to get away. Such short notice was it, in fact, that I was landing in Port Moresby in less than 24 hours after I had booked my flight.

The YWAM PNG is a fully equipped medical aid ship serving in some of the most needy regions of Papua New Guinea. It includes a 4 chair dental surgery, an eye surgery clinic and accommodates over 100 medical professionals.

Our days were hot, muddy and long. At 7am we would eat breakfast, from there we’d have a team meeting and break off into our outreach crews for the day (each day we would visit at least two different villages). By 8:30 we would be skimming across the muddy Bamu river towards our designated village. Upon arrival, the medical team including optometrists, dental screening teams, general health care workers, midwives, education teams and tuberculosis testing lab teams would setup and start work.

Upon returning to the ship, and after a well-deserved shower, we would share stories and for the media team; we would edit. And edit and edit. Each day we did around 5 hours of photography and often upwards of 7 hours editing.

The images I captured are more than just photos. They are stories of people that may never have their story told again. They are a snapshot into a way of life most of us can never imagine.

We are not so different, you and I. We are all human. 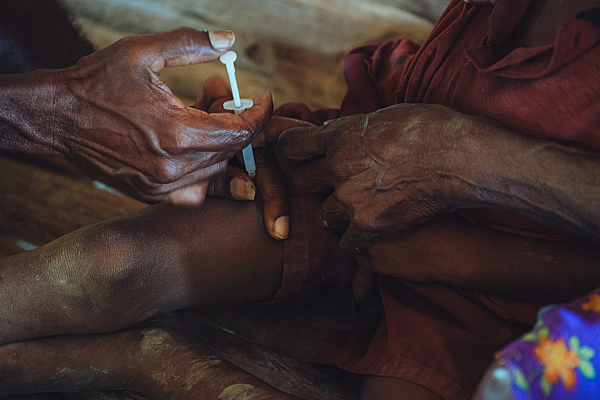 For the first time in his life, this grandfather holds a photo of his daughter and grandchild.

A young child sleeps peacefully in its mother's loving arms.